This blog is a place to record my search for the victims of the 1905 Odessa pogrom, who they were and what their lives might have been like. As far as I know none of this list of 300 Jews in the Odessa rabbinical death records has appeared online before, and, in fact, none of the researchers I contacted who used or worked in the Odessa archive seemed to know the whereabouts of this list. Nor did they mention that there is a monument at the Odessa Jewish cemetery with the names of those in the rabbinical 1905 pogrom death records carved on large stones. Several pictures of the stones have appeared recently online but no one has recorded the names or put photographs of the series of stones online.

The list of 300 deaths is probably only one group of those who died in the pogrom, a group who were recorded in the rabbinical records and probably the group who were buried in the Jewish cemetery. Many others would not have had that fortune. One common figure for the number of Jews killed is around 400, the number in a police report, and another figure, 800, comes from the Russian Jewish journal Voskhod. The governor of Odessa himself, Neidhardt, who felt the Jews, especially the socialists, were responsible for the pogrom, estimated that there were 2500 deaths (Robert Weinberg The Revolution of 1905 in Odessa: blood on the steps, 1993), and in the newspapers around the world figures anywhere up to 15,000 dead were mentioned. Although there are a few stories written by witnesses of the Odessa pogrom, as far as I know, there are no stories by the families of people who lost relations in the pogrom. These ghost stories of people who died in the pogrom exist only between the lines if they exist at all. And although there are several academic studies of the Odessa pogrom, there is no social history of the people who lived through the pogrom, of how it spread through the city and surroundings, and who was affected. Some people become interested in history because of the family stories of the past that they have heard repeated again and again through the generations. Others become interested because their families tell no stories. This search for records of the 1905 Odessa pogrom arose from a complete absence of stories about where my grandparents had lived in Russia before they emigrated in 1906. 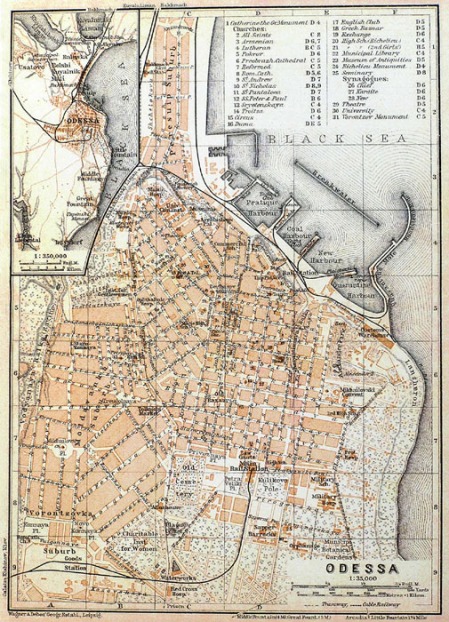