It is one year since museums around the world began to celebrate the centenary of the Russian Revolution. Tate Modern had two exhibitions to commemorate the Russian Revolution which will both soon have finished. One consisted of some of the Russian posters of a graphic designer, David King, who had been collecting Soviet photographs, posters and objects since the 1970s when he went to Russia to research an article for The Times about Trotsky, and found that Trotsky had been removed from photographs. I unfortunately could not see both exhibitions, and because I had already seen several exhibitions with Russian posters, I chose the second. I was also more intrigued by some photographs I found online of King’s house where he kept his thousands of Russian pictures and objects before he died last year.

The other exhibition was of Ilya and Emilia Kabakov’s work. Ilya Kabakov left Russia for New York in the late 1980s and he and his wife collaborate on installations and other projects. He began as an illustrator in Moscow in the 1950s and because his art was not the accepted social realism but critical or satirical of the situation in Soviet Russia, he made models and smaller works of his ideas, most of which were about people freeing themselves from the restrictions of communism. He himself had been brought up in quite a poor Jewish household as his parents were rarely together. When he got a place at an art school as a 12-year-old in Moscow, his mother came to be near him, but without a residence permit, could not get an apartment, and tended to just sleep for a few months at a time in different people’s crowded commuter apartments, working in factories wherever she could. His mother had lost her parents through starvation after the Civil War and had a very hard time up until her son was able to finally buy her an apartment in the late 1950s.

I will begin with a few of his early and then later illustrations, followed by some of the works of the exhibition and other more recent pieces, centred around important themes. Since he went to America in 1987 he has been most known for his installations, many of which were constructed as models while in Russia. One work at the exhibition uses his mother’s memoir framed with photographs taken by a photographer uncle to create a haunting memorial to her. His work is a fitting celebration of the humour, sadness and inventiveness that can come out of poverty and tragedy. 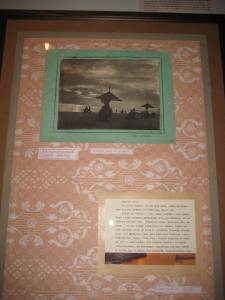 One theme Kabakov returns to again and again is the communal apartment, particularly communal kitchens and toilets. At one point his mother worked in the laundry of his boarding school and because she had no residence permit, slept in the laundry, which had originally been the toilets, and some of the toilet cubicles remained. In 1992 he constructed what looked like a public toilet block outside of a museum in Germany which was exhibiting his work. Inside, were some disused-looking toilet cubicles and the furniture of an ordinary living room 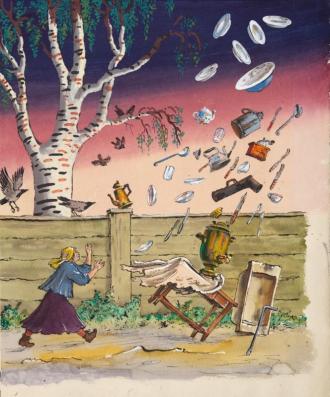 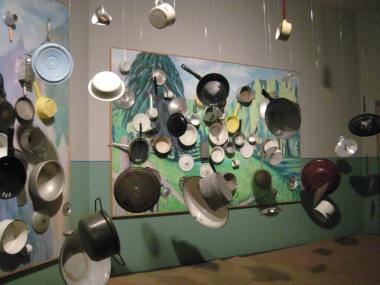 Incident in the corridor near the kitchen 1989

In the communal kitchen 1991

Another important theme is flying, freedom and escaping totalitarianism to a utopian life. One of his most well-known installations is The Man Who Flew into Space from His Apartment.

The Man Who Flew into Space from His Apartment 1988 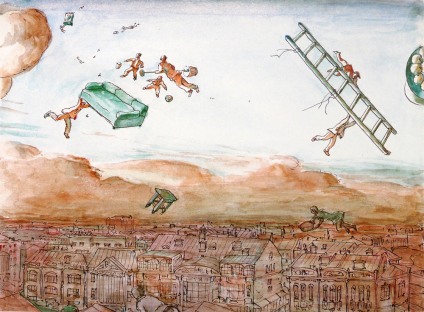 Feeling that life in the Soviet Union was unreal, Kabakov invented imaginary characters who could lead his ‘real’ life, and made albums of drawings, writings and objects for these characters such as Komarov. Some of his later installations involved objects hanging from strings, one of which was the character The Man Who Never Threw Anything Away.

10 characters: The man who never threw anything away 1988 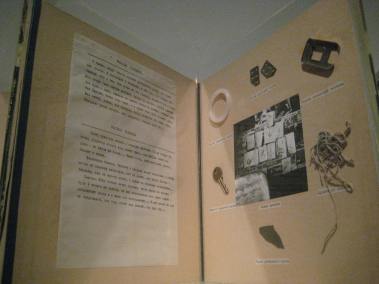 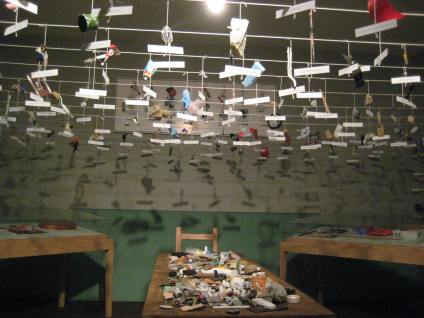