When I was writing about Malaya Arnautskaya, the Weitzmans and anti-semitism, I puzzled over the problems I had finding the street at the beginning of Malaya Arnautskaya running parallel to the coast, called Belinskaya on several websites, until I finally discovered that it was called Leontovicha on modern maps. Then I realised that possibly people carry on using the old names if they prefer them. And I wondered about other name changes in the streets of Odessa which I had noticed on various maps and whether any had been influenced by the 1905 pogrom, for instance the central street Evreiskaya or Hebrew Street. This was changed in 1908 to Skobelevskoi or Skobeleva (Скобелева). Another street in central Moldavanka where many families in the pogrom death records lived, and in the area investigated by the police, was Ulitsa Gospitalnaya or Hospital Street, the street of the Jewish Hospital. It is now Bohdan Khmelnytsky Street (Богдана Хмельницкого). This was also the street with the highest population density in Odessa at that time. 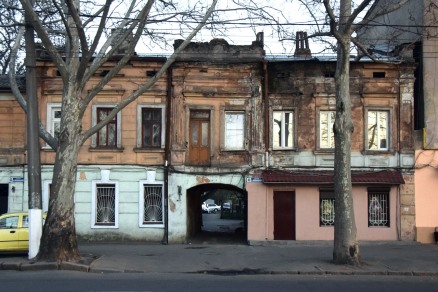 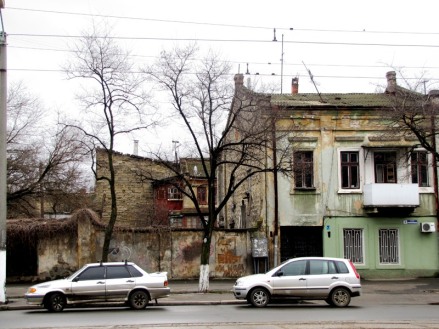 The first Jewish Hospital was set up in 1802, only a few years after the start of building of the new port of Odessa designed by Catherine the Great, which previously had been mainly a Tatar fort and small fishing port. Before that  there had been a Jewish society for visiting patients called Bikur Holim. In 1829 the hospital purchased a house on the corner of Gospitalnaya and Myasoedovskaya which had 60 beds and one doctor. A new building, the building still in use, was built in 1865.

The hospital was closely connected with Jewish life in Odessa. In 1905, the courtyard of the hospital was turned into a camp for the many displaced families whose homes were destroyed. They were provided with free food and medical care. In the highly populated area of Hospital Street, when the police were brought in to quell the pogrom riots, there was a battle between the police and the Jewish defence group where 11 were brutally killed. https://evreimir.com/9198/ 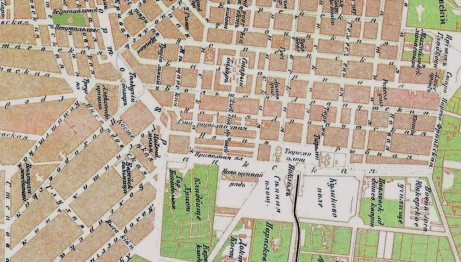 The name Gospitalnaya or Hospital Street remained from the early 19th century until 1911, when there was a 50th anniversary celebration of the liberation of the peasants from serfdom. Gospitalnaya became 19 February 1861 Street, a name which never took hold, as happened with many of the multiple street name changes over the years. And strangely the name kept ricocheting back and forth between 19 February and Hospital Street. It is interesting to think why this one small street should have been chosen to have its name changed at that time. Did they want to change the Jewish identity of this street?

This is a rare map in English from the 1914 Russian Baedeker on the eve of World War I and coming revolution. Interestingly, it is also a rare map that does not indicate the Jewish Hospital on 19 February 1861 St or the Jewish cemetery just below the Old Cemetery. It does however mention the Plague Cemetery, which I had not noticed before which is called Plague Hill (Чума Гора) on Russian maps. 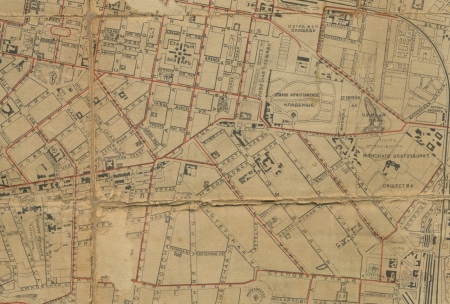 In this 1919 map, just after the revolution, the individual buildings of the Jewish Hospital are clearly drawn as are the Jewish Cemetery, Old Cemetery and Plague Hill. A map from 1924 was made for the purpose of showing the name changes that followed the revolution. Many of the centre streets have been given names like Lenin and Karl Marx Street and the old history of multicultural Odessa with its Hebrew and Greek Street has been wiped away. Hospital Street has regained its name and 19 February has been written in brackets. 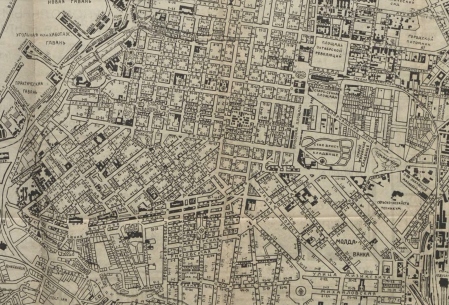 By 1931 there were more name changes and changes of spelling. The street that crossed Gospitalnaya at the corner of the hospital, Myasoedovskaya, had now become Sholom Aleichem Street. What was Gospitalnaya is difficult to read because the first letter is on a fold of the discoloured map, but the name seems to be лютого, which I discovered is Ukrainian for February, so it has reverted to 19 February Street.

By 1947, the street is again Gospitalnaya. At some point after 1947 there was one more change which has lasted until today. The first appearance I have is a map from 1962 with the name Bohdan Khmelnytsky Street. Bohdan Khmelnytsky was the leader of a Cossack rebellion against the Poles in 1648. He united Ukraine and was considered a saviour but also tried to rid the area of Jews, killing tens of thousands and destroying their towns. That this famous figure in Ukrainian history, who caused possibly the greatest massacre of Jews before the Holocaust, should be used as a name for what had been called Hospital Street after the Jewish Hospital, in the heart of Jewish Moldavanka, seems quite horrific. It may have been a way of clearly stating that finally the Holocaust had completed what Bohdan Khmelnytsky had wanted to accomplish, as there were no longer enough Jews in Moldavanka to resist the name change.

As I was looking at these maps I did not recognise the name Bohdan Khmelnytsky until I looked him up and realised that I had once read about the Cossack uprising of 1648. At the base of my 1812 family tree is the very famous Jewish Rabbi David ben Samuel Halevi (1586-1667), an ancestor most people wanted to have on their family tree, especially a rabbinical family like mine, although it appears this was often only wishful thinking. On my tree, above the name of the great Rabbi is his son, Shmoul, then his son, Shimson, and then Rabbi Shlomo, the son of Yehiel, unrelated and obviously my ancestor who came from northern Ukraine like David Halevi. And to complicate matters further, the translator wrote ‘son of Shmoul’ below David Halevi but in a diagram at the end indicates that Shmoul is the son of David. It is, however, easiest to read a family tree as one generation following another, whatever the names, and my family believed that the famous rabbi was their ancestor. One sees what one wants to see until suddenly the lack of continuity pops out at you and the fantasy dissolves. Possibly none of the first three names on the tree are related or could they be? 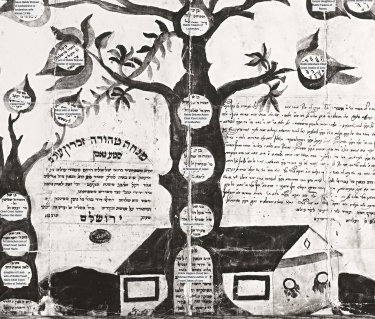 In the meantime I had read about the life of David ben Samuel who built a majestic synagogue in the small northern Ukrainian town of Ostrog, Volhynia. He was rabbi there for many years until he was forced to flee from the massacres of Khmelnytsky and the Cossacks.

Another name that comes up when searching Hospital Street is Isaac Babel, whose well-known Odessa stories took place in that area of Moldavanka at the time of the 1905 pogrom. It is also thought that one of the models for his bandit, Benya Krik, was a gangster who lived on Hospital Street. But that will be in the next post, as I will probably want to puzzle over Babel’s relationship with Moldavanka and the 1905 pogrom… and the mysteries of his life in general.