While looking for the Kuperberg family on the Ellis Island database, I came upon a little five-year-old girl, Mindel Kudler, travelling ostensibly alone from Odessa to New York in 1905. I got up the manifest and saw that her ship had left in August 1905 from Hamburg, and she was travelling with her grandmother Libe Zajac to her mother Chana Kudler at 149/151 Centre Street, Brooklyn. Grandmother and granddaughter were detained for a few days at the hospital before being admitted to the US. Possibly Mindel had not been able to travel with her family because of illness. This was a family who had left Odessa just before the pogrom but I was interested in what had happened to this child, ill and separated from her family, possibly for many months.

It was difficult to read the grandmother’s and the mother’s first names, so I tried Minnie Kudler in the search on Familysearch and came up with the 1920 census, but the mother’s name was Fannie. The father was Barnet, a stable proprietor from Odessa, so I knew I had found the right family. They were living at 37 Moore Street. Although no one else bothered, people from Odessa often insisted on Odessa being written into the census. Minnie was 19 and not working although her older sister Mary and younger sister Rose were both office workers. Possibly Minnie was helping to keep house as there were eight children in her family and there were another six children with the last name Lipshitz, which I assumed to be Fannie’s previous name. The youngest Kudler child to be born in Russia was Mollie, born in 1905.Mary, Minnie, Rose and Mollie were born in Russia and Morris, Joseph, Florence and David, who was only 4, were born in New York. The Lifshitz children were Abe, 19, Archie, Teddy, Hyman, Annabelle and Florence, who was also 4, and they were all born in New York. 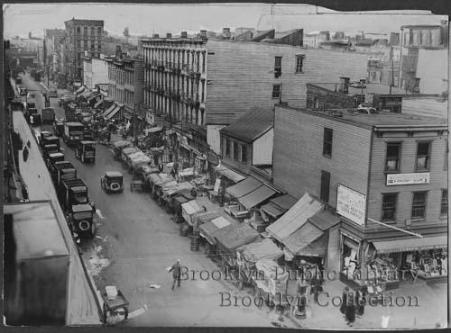 The next census I found was 1930 and Fannie is now Fannie Lipshitz, living with her children Abe, Morris, Archie, Theodore, Annabelle and Florence, ranging in age from 29 to 14, still at 37 Moore Street. Two more children are tagged at the bottom, Daniel, 15, and Lena, 18. It seems that a lot had happened in those 10 years and it took quite a bit of effort to piece together the complicated story of the Kudler and Lipshitz families from the records I could find. 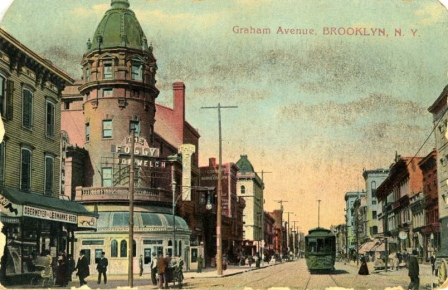 I never found either family on the 1910 census, but I found Fannie and her first husband Frank on the 1900 census when they had a daughter, Tillie, born in 1897 and a baby son, Hyman, born in 1899. Frank was a removal man. They lived on Manhattan Avenue which runs through the centre of the Jewish area in Williamsburg, Brooklyn. Another Hyman Lifshitz, a tailor 24, was boarding next door who, I found out later, was Frank’s brother. I then found the 1897 marriage record for Frank and Fannie, and also the ship’s manifest when Frank came to the US in 1889 at 19. By 1905 they had three more children besides Tillie and Hyman, Abram, Morris and Harry, and lived at 37 Moore Street where Fannie remained for as long as I could find her. Frank’s brother was living with them and the brothers were working together as ‘express men’.

In 1915, the Lipshitz’ son Hyman is no longer there. Most New York City death records give details of the birth and death, address, burial date and names of parents. The only death record from that time is one of a Hyman Lipshitz who died 12 May 1908 with no details of his birth or parents. Hyman would have been 9. There is no other death record like that and I assume, if this is his death record, they were too upset to fill in the form properly. By 1915, the Lipshitz’ have seven children. Harry has become Archie. There is Tillie, Abe, Morris, Archie, Theodore, another Hyman, and Anna (later Annabelle). By 1920 they had added their last child, Florence, but Frank was no longer alive. He had died 30 July 1917 when he was 48.

I had a great deal of trouble finding anything about the Kudlers before 1920. I could find nothing about the mother Mindel was travelling to in 1905. If she died, I could not find a death record. Then, at long last I found Barnett, a carpenter, and Anna Kadler on the 1915 census living at 281 Christopher Ave, further south in Brooklyn. By their address was written Rm 2, and I wondered whether they were living with their 7 children (Mary, Minnie, Rose, Mollie, Morris, Joseph, Fanny/Florence) in one room. Before Anna died, she had another child David who was born in 1915 or 1916. Anna may have died after the birth. Sometime before 1920, Barnet and Fannie married and he moved with his children into 37 Moore St.

There was one more major change in 1920. There is a marriage certificate for 11 May 1920 in Florida for Minnie Kudler and Nathan Treifler, who also came from Brooklyn. Minnie’s age is listed as 21, the age when consent was no longer needed although she was probably 19. And it also says ‘her mother is dead’. Often the names of the bride’s parents were mentioned in these Florida marriage certificates. No names are mentioned on this one. Possibly Minnie and Nathan went to Florida to spare their families the cost of a wedding. This is the only personal statement in the records for Minnie, who was separated from her mother in 1905, then reunited only to lose her again sometime after 1915. 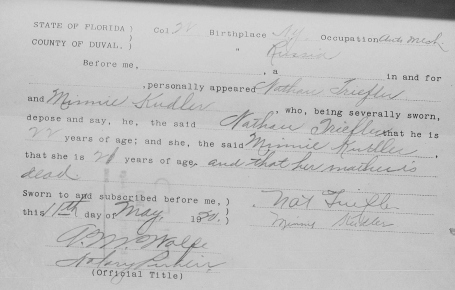 More changes occurred by the 1925 census. Barnett and Fannie were still living at 37 Moore Street, but Fannie now called herself Fannie Lipshitz and is listed as Head with all of her 7 children. Morris, 22, is called Moe and Hyman, 13, has become Herman. Barnett is listed as Head with his three youngest children, Joseph, Florence and David. Possibly this had never been a real marriage but just an arrangement for convenience, with Barnet providing the money and Fannie looking after the house and both sets of children. Maybe they now had two flats in the same house. Two of the other Kudler daughters, Rose and Molly, were living with Minnie and her husband on Lorimer Street, not far from Moore Street. The oldest daughter, Mary, was in her mid-20s, and may have been living on her own. Morris Kudler is not on the census.

The 1930 census took place on 5 April and Barnet had died on 25 March. The family was still living at 37 Moore Street – there were six Lipshitz children, as for some reason Herman, who would have been 18, is not there, plus two added children with no last names who had me puzzled for a long time. They were Daniel, 15, and Lena, 18. Eventually I worked out that Daniel was actually David Kudler and Lena was Florence Kudler, possibly nicknamed Lena because there was already a Florence in the family. Fannie was working as a sales lady in a dry goods store and three of the four older sons were working. Fannie’s eldest daughter, Tillie, was now married with three children, and also had Hyman Lipshitz, her uncle, boarding with her. Rose and Molly Kudler were living with Minnie Treifler who now had two sons. Joseph Kudler had changed his name to Cutler and was married with a son. They were all living in Brooklyn. Mary Kudler still does not appear. Morris who was about 23 was also missing. There is one census page with a person Morris’ age called Kutler, a boarder, but nothing much was known about him including his first name, so he was obviously not present. He may have only recently moved. Herman never appears again. He has disappeared like the older brother whose name he had.

I could not find Fannie Lipshitz in 1940. The family had split up and the younger children, now in their early and mid 20s, were living with married brothers and sisters. Morris Lifshitz had become Murray and was living with his wife and two children in Newark New Jersey with his two sisters Annabelle and Florence. Tillie now had four children. Archie was married. Teddy had died in 1935.

Joseph Cutler and his family had moved to Florida. The others were in Brooklyn. Morris Kudler was living with his wife and baby at the home of his in-laws. Minnie Treifler now had three children. Mary finally appears in the census as Mary Cutler living on Atlantic Avenue in Brooklyn. Living with her are Rose and Daniel Kudler, and their sister Florence Myers. The sisters were doing office work, bookkeeping or stenography, and the brothers were in sales.

Although the Kudler family was not involved in the Odessa pogrom, they had left Odessa in 1905, a time of great turbulence. It was the year of the first revolution beginning with the Potemkin mutiny in Odessa Harbour in the summer of 1905. They may have felt pressured to leave as events were unfolding. I continued researching the family when I saw the two families managing with 14 children between them and how, as one after the other, the parents died early, the children continued to live with and look after each other. The children who did not have their own families came together and made a family together, something that has happened in several of the Odessa families.