In the last post, after mentioning the way society seemed to erase pandemics like the 1918 flu and encephalitis lethargica, I remembered that one of the families I tried to trace from the Odessa pogrom death records, the Kotliarskys, had a son who died in New York of encephalitis lethargica in 1921, when he was 20 years old. His death was mentioned in the local newspaper along with three other people who had died that day of the same disease. It was a highly feared disease that made headlines often. Every death and every case where young people, sometimes tiny children, were left in a partial coma, was written up in the newspapers. It was thought to have affected about 5 million people worldwide and about 1.5 million died. It is usually said to have lasted about 10 years, from 1917 through the 1920s, but I found many newspaper reports in the 1930s and even a few cases mentioned in the 1940s.  In 1924 a London epidemic of 2500 with mortality of 15 to 20% is mentioned in the US newspapers. And yet children growing up a decade or so later in the 1950s, whose parents had lived through those years, knew nothing of it, until Oliver Sacks wrote Awakenings (1973) after working in a hospital in the 1960s that cared for those who had the long-term coma-like aftereffects.

The Kotliarskys, the mother, Chana, a widow, and her six children, ranging in age from 21 to 3, Itzack, Mindel, Hene, Dina, Sure and Leib, came from Odessa to New York on 27 February 1906. Chana had a brother in New York, Charles Popkin. Four years later on the 1910 census the family was living on Avenue B in Lower Manhattan. Chana had become Hannah, and the children had become Isidore, Anna, Dora, Sarah and Louis. Mindel had become Minnie and was now married to David Schlimowitz and living next door with a baby, Gussie. The three oldest children were working in the clothing trade as was David. Ten years later, on the 1920 census, both families had moved to the Bronx. Isadore was still a cutter of men’s suits and Diana (Dora or Dina) was a dress designer. Sarah was a bookkeeper. Louis, at 19, was still in education. Minnie now had four daughters and the two families were living together. Anna was married with two children and living a few streets away.

The Kotliarsky in the Odessa pogrom death records was Kushel Aronovich, a 71-year-old from Lida. I thought he might be the father-in-law of Chana who was 44. The name K. Kotliarsky was in the 1902-3 Odessa directory on Glukhaya Street 8 (улица Глухая, Deaf Street, now Zaporizhzhya Street). I do not know why it was known as the street of the deaf but it was in the heart of the Moldavanka, perpendicular to Hospital Street. 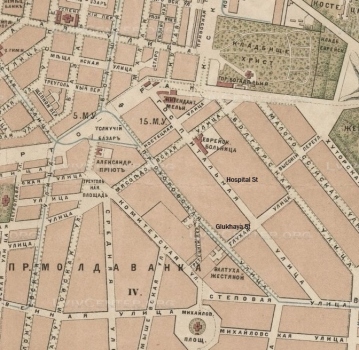 Isaac Babel mentions Glukhaya Street in his Odessa Stories. It is thought that the gangster, Mishka Vinnitsky, the model Babel used for his own gangster character Benya Krik, was born at Glukhaya Street 11. Elsewhere it says he was born on Hospital Street. 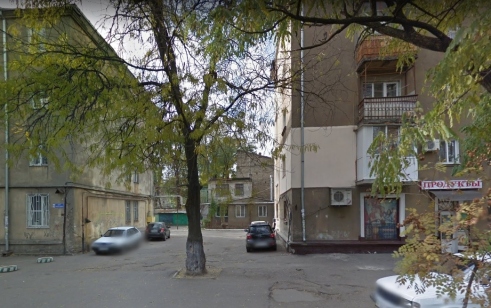 Glukhaya St 8 in the courtyard

On a website that describes the old streets of Odessa http://odesskiy.com/ulitsi-v-istorii-odessi/zaporogskaya.html , Kisel Kotliarsky is described as the owner of No.8, a native of Lida, and owner of a grocery store, who lived there with his wife, six children, brother-in-law and a servant. So Chana was actually the widow of Kushel, the father of her six children, and the brother-in-law may be the brother she followed to America after the pogrom that killed her husband. This is one of the very rare cases I have found in the records where someone who died in the pogrom is described in historical writing on Odessa. However, none of these historical descriptions mention the deaths in the pogrom unless it is in one of the pogrom reports itself, as happened with the two small orphaned Scheindless brothers in Peresyp who lost both their parents in the pogrom and were sent to an orphanage in New York (https://wordpress.com/post/odessasecrets.wordpress.com/228 ).

In 1920, everything was to change for the Kotliarsky family once again. Although the encephalitis lethargic, or sleeping sickness, epidemic was probably mentioned in the newspapers daily at that time, it may have been unknown to Hannah and her family until their youngest son, Louis, was struck down. Still a student at 20, he was the child who had been through the entire school system in the US and may have been at college studying for a profession, made possible by the older children working. The disease began with a high fever, sore throat, double vision, muscle pain, lethargy or sleeplessness. In severe cases the patient would slip into a coma and sometimes remain that way for weeks, months or years. About a third of patients, like Louis, died. On the day of his death, three other people died and three cases were reported. The ages of the three others who died were 70, 35, and 3.

Six days before Louis died on 24 February, there was a main article in a New York newspaper about the Bronx Borough President, Henry Bruckner, being diagnosed with encephalitis lethargica, after feeling very sleepy and having double vision at a meeting, although his was a mild case that had been lingering for some time.

The death record for Louis states that he was 20, a student, and lived in the Bronx at 842 Hewitt Place. His parents were Kisel Kotliarsky and Anna Marashinsky.

There is an interesting article 10 days earlier about the infectiousness of epidemic encephalitis lethargica. Although described as highly infectious, it is also described as not infectious in the ordinary way because the cases are not found in the same places, but they have not thought through the possibility of mild cases like the Bronx head, or the effects of people travelling on public transport and picking up the disease in shops or workplaces all around the city.

It felt to me as if the Kotliarsky family had been frozen in time, as Louis may have been at the end of his illness, because it became very difficult to find any records for them after 1920. Eventually I found some under the name Kotlar. In 1930, the mother, Hannah, had now become Anna, as her daughter with the same name had moved away, and she was living with her two unmarried children, Isidore and Sarah, whose lives also seem to have been halted. They were still living with Minnie and her family. Isidore was still working in a clothing factory and Sarah was a bookkeeper at a bank. Sarah became naturalised in 1932 under the name Kotliarsky. The document is signed by David Schlimovitz and Abraham Kotlar, a physician in the Bronx, who I presume was a relation. In 1940 Isidore and Sarah are still living with Minnie, David and three of their now grown-up daughters. Anna must have died in the interim although I could not find a death record. I could not find Dina in the records after 1920 at all.

I discovered that Sarah had married at some point after 1940 as there are death records on the Jewishgen Online Worldwide Burial Registry for Sarah, Isidore and Louis. Sarah is Sara Bockstein/Kotliarsky/Marashinsky /Kotlar, born 10 May 1896, died 24 April 1972. Her father is Kiser Kotliarsky and her mother Anna Marashinsky. Below is written ‘beloved aunt and great aunt/sister of Louis Kotliarsky and Isidore Kotlar.’ There are similar statements for Louis and Isidore, possibly from their gravestones. Louis has been remembered although the sleeping sickness may not have been mentioned in the family, and I wonder whether the older children passed on their memories of Moldavanka, the pogrom and their father’s death.