One child in the pogrom death records who I have always wanted to write about is Boris Pasekov (Борис Пасеков), ‘about 8’. He is the only child of unknown age who is on the list without any family or mention of his father or where they were from. All the records are dated 27 October and state ‘killed at the time of the pogrom’. 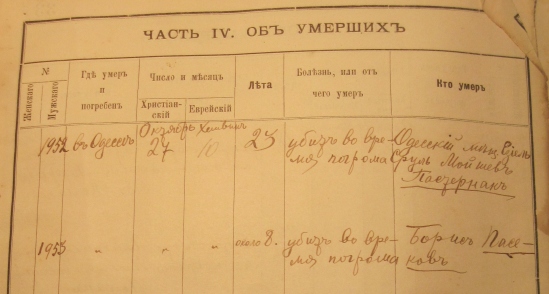 The pogrom list is far from complete – there were thought to have been about 900 deaths and the list has only 300, so it must have been compiled in one area or on one day, possibly from police records. So Boris Pasekov’s other family members may have died or the family may have fled from Odessa. Pasekov is not a common name and it does not appear in the Odessa directories or birth records. The closest name is Posokhov (Посохов ) which I found was a property-owning family in the directories of the early 1900s. On Wikipedia I found a Major General Andrei Andreivich Posokhov, Андрей Андреевич Посохов, born in 1872 in Odessa. In the directories there was an Andrei Ivanovich Posokhov (born 1879) who was in the Duma and an M. Andreivich who owned several properties in the city centre and in Moldavanka. One of the properties was very central at Ekaterinskaya St 29 and may have been the family home.

I then checked the US records for Pasikovs and mainly found one family from Gomel in Belarus who went to Winnipeg and later Detroit, Michigan. There may have been other Pasikovs who emigrated later and appear in less records. Returning to Russian records, I tried the Yad Vashem Holocaust records and found a few Pasikovs and Pasikhovs from Gomel and various parts of central Ukraine, but none from Odessa.

Jews travelled great distances across Eastern Europe and Russia to better their lives, exemplified by the huge influx of Jews to Odessa in the late 1800s and early 1900s, so it is difficult to know whether these Pasikov families in Belarus and Ukraine were from the same family or different ones. I’m beginning to think that when a name is rare it might be one family as it was quite likely that, in a large family of up to 10 children, a few would go to distant towns to find better jobs, possibly somewhere where they knew a friend or relation.

As there was no indication of where Boris Pasekov was from, and he is not in the Odessa birth records, his family may have travelled from Gomel or from one of the closer towns in Ukraine to Odessa a few months or years before the pogrom. I next tried the birth, marriage and death records on Jewishgen and found Pasikovs in Gomel and Minsk, and a family in Soroki in Bessarabia, but not much more.

I then began to look through the Jewishgen Holocaust records and found a couple of people from Ukraine evacuated to Tashkent, one from Gomel and the other from Dobrai in the Nikolaevsky District, and finally in the Romanian records, I found someone evacuated during the war from Odessa, although it does not say where to. This was Nikolai Pasikov who was born in 1923 and was probably about 17 or 18 when he was evacuated. Unfortunately the record does not say where he was born. His parents were Ivan and Ekaterina, who lived at Voznesenskii Lane 1, a small street between the Jewish cemetery (on the edge of Moldavanka) and the railway station, at the south edge of the city centre.

It is intriguing that this is the only family represented in the pogrom death records with a typically Russian first name and all the members of Nikolai’s family also have very Russian names. Possibly they had come to Odessa for its cosmopolitan life where Jewish children often went to Russian schools and Jewish schools taught the Russian curriculum. Ironic that such assimilated Jews should be caught up in the pogrom, but it was the educated and successful Jews, and those who had taken up left-wing politics to get equal rights, who were more of a thorn in the side of the Russians.

It was amazing fortune to be able to find an address and place this family, who may have been related to Boris. As Nikolai was born in 1923, his father, Ivan, may have been born around the time that Boris was born, in 1897. They may have been brothers or cousins.

According to old maps of Odessa, this area just south of the station was still country houses and dachas during the first few years of the 1900s, which is probably why it remained a narrow lane. After a bit of searching, I found a website which lists the history of every house on Voznesenskii Lane (https://domofoto.ru/list.php?uid=993 ). In 1902, there were dachas on the site with different owners, although all named from the original owner, Dacha Khalaidzhoglo (Дача Халайджогло) with a number. Between 1905 and 1907, the houses were renumbered with the street name Voznesenskii Lane. Also in 1907 an arts and crafts mansion, Mansion Weinmarn, was built on one of the plots. 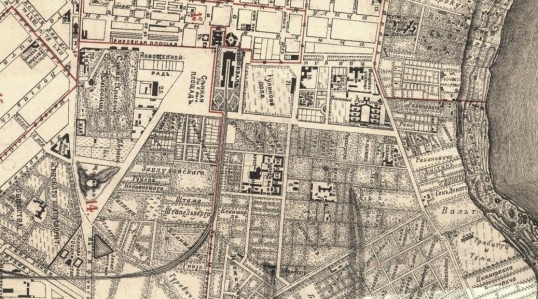 This map of 1901 shows the Black Sea on the right with dachas going down to the cliffs, the railway station in the middle with the track running south. On the left is the old Christian cemetery with the Jewish cemetery below. What became Voznesenskii Lane is the left-hand street of the square of laid out dachas to the left of the tracks just below the station, the original plot owner’s name, Khalaidzhoglo, written diagonally acoss it. He must have originally had a country house there and then divided the land into plots for small dachas.

Close-up of the station, Khalaidzhoglo dachas and cemetery on the left

The lane looks like it may have been built up by 1916 according to a map of that year.

In this map of 1916, the station is towards the top centre with the cemeteries below and Voznesenskii Lane is now a numbered street making the lower border of what was the square of dachas. It gives an idea of how Odessa was growing and spreading south along the coast after 1905 . 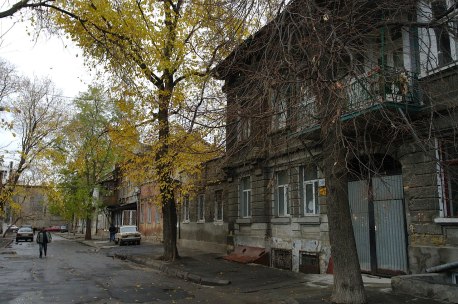 So Boris Pasekov may have had some relations who survived the pogrom and possibly even the Holocaust. They may have been living in Moldavanka in 1905, but at some point may have moved to new houses on the edge of Odessa near the market, the railway station and close to the sea. We will never know what happened to Boris one day in late October 1905. He may have simply got caught up in the chaos of the pogrom one afternoon walking home from school or going to the shops.

odessasecrets: the 1905 pogrom
Blog at WordPress.com.